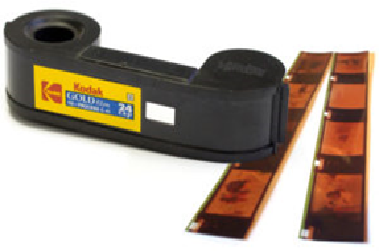 A type of photographic film housed in a plastic cassette. Because it’s light-tight, the film can be loaded into a camera in daylight. 126 cartridge film was introduced by Kodak in 1963, followed by 110 film in 1972. Two later formats, Disc film and APS film, used their own specially designed cartridges.

The appearance of the first plates for color photography