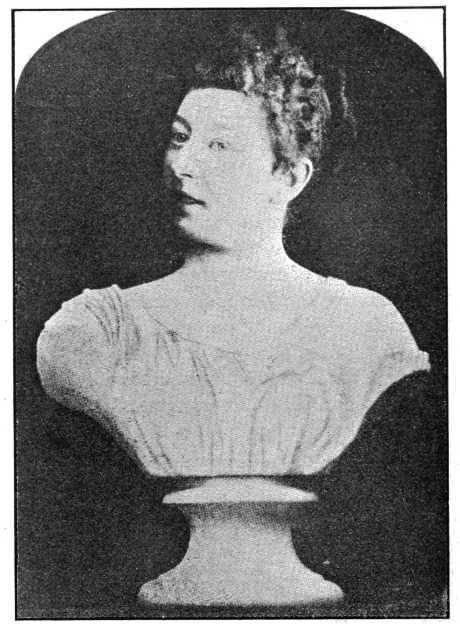 These were at one time quite popular, and if properly managed can be rendered very effective. There are several methods of making this kind of picture. If the photographer possesses a pedestal large enough, all that is necessary is to place this on a stand and the person to be photographed is arranged behind.

The breast is uncovered and some white soft material artistically arranged in folds over the shoulders and in such a way as to appear connected with the pedestal. A black background is placed behind and the exposure made. To give a more realistic effect the hair, face, and all other parts showing should be liberally powdered over with a white powder or rice flour. The negative produced will have a clear glass background, but the body of the figure will still be visible. This is removed by cutting away the film round the pedestal and to the arms on each side, leaving only those parts remaining that are required to produce the statuette. In printing we get a white statuette portrait on a dark background.

If the photographer does not possess a pedestal, the next best means to produce these pictures is to get a large sheet of cardboard and cut it out to the shape shown in the figure beneath, and with white paint make the picture of a pedestal, shading with a little gray to give rotundity. The figure is stationed behind it, and a black background used.

A third method involves still less trouble. This is to purchase a ready made pedestal negative. These are film negatives of a pedestal that can be adjusted to the negative of the subject desired to be produced as a statue. After the negative is taken and varnished the film is scraped off round the figure, cutting off the body as shown in the first illustration, after which the pedestal negative is adjusted, fastened, and then printed. The negative is reversible and can also be used for different subjects. The picture shown in Fig. 13 was made by Mr. G. B. Bradshaw, of Beach House, Altrincham, England, by means of one of his pedestal negatives.

The ABC of Photography – Barn doors

The ABC of Photography – Cartridge film