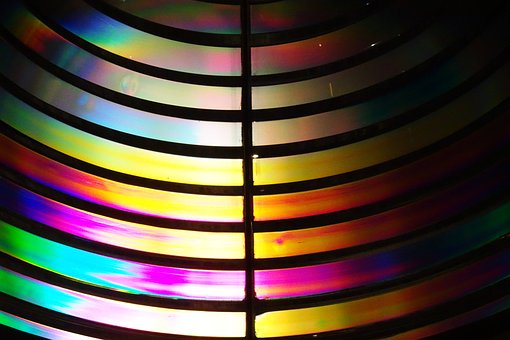 The name anamorphosis has been given to two kinds of pictures

distorted according to a certain law, and which are of such a

grotesque appearance that it is often impossible to recognize the

subject of them; while viewed with proper apparatus they appear as

perfectly correct images. One kind is designed to be viewed by

Until quite recently, these pictures were drawn approximately from the reflection of the object as seen in a convex mirror, the position of which was indicated on the drawing and which restored it to its real form. M. Fenant conceived the idea of employing photography for obtaining these pictures. Fig. 9 reproduces a photo-anamorphosis from a negative by M. Fenant. If a cylindrical mirror be placed on the black circle shown in the reproduction the photograph will appear in its original form. Our illustration represents a portrait, although the features are barely recognizable. Similar pictures may be obtained by photographing the drawing or subject reflected in a cylindrical concave mirror placed perpendicularly.

The second kind of anamorphosis is produced by the distortion of the picture in the sense of one of its dimensions. To reconstruct it, it is caused to rotate rapidly, at the same time that a disc, perforated with a slit through which the picture is viewed, is rotated in front of it at a slightly different speed. The apparatus invented by M. Linde for producing the anamorphosis is shown in Figs. 10 and 11. _G_ is a camera provided with a revolving plate-holder, _T H_ are revolving discs the movement of which is made to bear a certain relation to that of the plate-holder by means of the band F and the pulleys _D D_. The whole is set in operation by a piece of clockwork and the cord _F_. _A_ is the axis of the camera, _B_ that of the plate-holder, and _C_ that of the revolving disc. On this disc is fixed the picture from which it is desired to make an anamorphosis.

The relative motions are so regulated that when the plate-holder has made a complete revolution the disc has turned through an angle of 60 to 80 degrees in the opposite direction. Between the plate-holder and the lens is a diaphragm pierced with a slit about 10 millimeters wide. The action of the light on the plate takes place through this slit. The negative obtained, prints are made upon plain salted paper and rendered transparent with wax or vaseline. These pictures can be viewed in the ordinary apparatus used for showing anamorphoses of this kind. The print is fastened to a revolving apparatus and in front of it is another disc painted black and provided with a number of slits. The latter revolves at one-fourth the speed of the picture, and the image, when viewed through the slit, resumes its normal proportions.

The ABC of Photography – J

The ABC of Photography – Catchlight