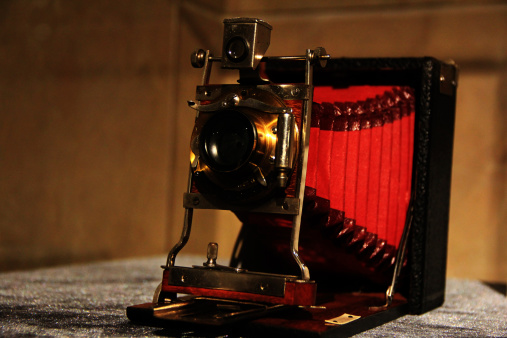 Extraction from The American Journal of Photography by Various

” On the twelfth of August, in front of the Smithsonian Institute, in Washington, dedicated to manifold arts and sciences, will be erected a lasting memorial to Daguerre, the author that we all know fixed the visible image on a given surface, which is photography, with all its varieties and names, and they are numerous.

Why should we Americans put up such a memorial? The inscription on the granite below the bronze portrait tells the story:

“To commemorate the first half century in photography, 1839–1889. Photography, the electric telegraph, and the steam engine are the three great discoveries of the age. No five centuries in human progress can show such strides as these. Erected by The Photographers’ Association of America, August, 1890.”

The monument, now almost complete, its bronze features being of a high order of art, will stand sixteen feet high, and will be the only international monument in the city of Washington, where Smithson himself dedicated his fortune for the advancement of science in the western world.

In connection with this celebration we present to our readers a portrait of Daguerre. Strange to say, there are but few authentic portraits of Daguerre in existence. In our search for such a portrait we discovered the one here reproduced; it was engraved by Orr from a photograph by Dr. Meade, of New York, for the International Magazine, of that city, and used to illustrate the obituary of the eminent Frenchman, September 1, 1851. As everything relating to Daguerre cannot but prove of interest at the present time, we republish the interesting article in full as it appeared at the time:

Lewis Jacques Mande Daguerre, whose name is forever associated with the photographic process, of which he was the discoverer, died on the tenth of July, in Paris, in the sixty-second year of his age. He was a man of extreme modesty and great personal worth, and was devoted to art.

He was favorably known to the world before the announcement of his discovery of the Daguerreotype. His attempts to improve panoramic painting, and the production of dioramic effects, were crowned with the most eminent success. Among his pictures, which attracted much attention at the time of their exhibition, were, “The Midnight Mass,” “Land-slip in the Valley of Goldan,” “The Temple of Solomon,” and “The Cathedral of Sainte Marie de Montreal.”

In these the alternate effects of night and day, and storm and sunshine, were beautifully produced. To these effects of light were added others, from the decomposition of form, by means of which, for example in “The Midnight Mass,” figures appeared where the spectators had just beheld seats, altars, etc.; and again, as in “The Valley of Goldan,” in which rocks tumbling from the mountains replaced the prospect of a smiling valley.

The methods adopted in these pictures were published at the same time with the process of Daguerreotype, by order of the French Government, who awarded an annual pension of ten thousand francs to Daguerre and M. Niepce, Jr., whose father had contributed towards the discovery of the Daguerreotype. Daguerre was led to experiments on chemical changes by solar radiations, with the hope of being able to apply the phenomena to the production of effects in his dioramic paintings. As the question of the part taken by him in the process to which he has given his name has been discussed sometimes to his advantage, it appears important that his position should be correctly determined. In 1802, Wedgwood, of Eturia, the celebrated potter, made the first recorded experiments in photography; and these, with some additional ones by Sir Humphrey Davy, were published in the journals of the royal institution. In 1814, Mr. Joseph Nicephore Niepce was engaged in experiments to determine the possibility of fixing the images obtained in the camera obscura; but there does not appear any evidence of publication of any kind previously in 1827, when Niepce was in England. He there wrote several letters to Mr. Bauer, the microscopic observer, which are preserved and printed in Hunt’s “Researches on Light.”

He also sent specimens of results obtained to the Royal Society, and furnished some to the cabinets of the curious, a few of which are yet in existence. These were pictures on metallic plates covered with film of resin.

In 1824 Daguerre commenced his researches, starting at that point at which Wedgwood left the process. He soon abandoned the employment of the nitrate and chloride of silver, and proceeded with his inquiry, using plates of metal and glass to receive his sensitive coating. In 1829 Mr. Vincent Chevalier brought Niepce and Daguerre together, when they entered into partnership to prosecute the subject in common. For a long time they appear to have used the resinous surface only, when the contrast between the resin and the metal plates not being sufficiently great to give a good picture, endeavors were made to blacken that part of the plate from which the resin was removed in the process of heliography (sun drawing), as it was most happily called. Amongst other materials, iodine was employed; and Daguerre certainly was the first to notice the property possessed by the iodine coating of changing under the influence of the sun’s rays. The following letter from Niepce to Daguerre is on this subject:

“Sir and Dear Partner:–I had long expected to hear from you with too much impatience not to receive and read with the greatest pleasure your letters of the tenth and twenty-first of last May.

“I shall confine myself in this reply to yours of the twenty-first, because, having been engaged ever since it reached me in your experiments on iodine, I hasten to communicate to you the results which I have obtained. I had given my attention to similar researches previous to our connection, but without hope of success, from the impossibility, or nearly so, in my opinion, of fixing in any durable manner the image received on iodine, even supposing the difficulty surmounted of replacing the lights and shadows in their natural order. My results in this respect have been entirely similar to those which the oxide of silver gave me; and promptitude of operation was the sole advantage which these substances appeared to offer. Nevertheless, last year, after you left this, I subjected iodine to new trials, but by a different mode of application. I informed you of the results, and your answer, not at all encouraging, decided me to carry these experiments no farther. It appears that you have since viewed the question under a less desperate aspect, and I do not hesitate to reply to the appeal which you have made.

From this and other letters it is evident that Niepce had used iodine, and abandoned it on account of the difficulty of reversing the lights and shadows. Daguerre employed it also, as it appears, with far more promise of success than any obtained by M. Niepce. On the fifth of July, 1833, Niepce died; in 1837 Daguerre and Isodore Niepce, the son and heir of Nicephore Neipce, entered into a definite agreement, and in a letter written on the first of November, 1837, to Daguerre, Isodore Niepce says, “What a difference, also, between the method which you employ and the one by which I toil on! While I require almost a whole day to make one design, you ask only four minutes! What an enormous advantage! It is so great, indeed, that no person knowing both methods would employ the old one.” From this time it is established that although both Niepce and Daguerre used iodine, the latter alone employed it with any degree of success, and the discovery of the use of mercurial vapor to produce the positive image clearly belongs to Daguerre. In January, 1839, Daguerreotype pictures were first shown to the scientific and artistic public of Paris.

The sensation they created was great, and the highest hopes of its utility were entertained. On the 15th of June M. Duchatel, Minister of the Interior, presented a bill to the Chamber of Deputies relative to the purchase of the process of M. Daguerre for fixing the images of the camera. A commission appointed by the Chamber, consisting of Arago, Etienne, Carl, Vatout, de Beaumont, Toursover, Delessert (Francois), Combarel de Leyral, and Vitet, made their report in July, and a special commission was appointed by the Chamber of Peers, composed of the following peers: Barons Athalin Besson, Gay Lussac, the Marquis de Laplace, Vicomte Simeon, Baron Thenard, and the Comte de Noe, who reported favorably on the 30th of July, 1839, and recommended unanimously that the “bill be adopted simply, and without alteration.” On the 19th of August the secret was for the first time publicly announced in the institution by M. Arago, the English patent having been completed a few days before, in open defiance and contradiction of the statement of M. Duchatel to the Chamber of Deputies, who used these words:

“Unfortunately for the authors of this beautiful discovery, it is impossible for them to bring their labor into the market, and thus indemnify themselves for the sacrifices incurred by so many attempts so long fruitless. This invention does not admit of being secured by patent.”

In conclusion, the Minister of the Interior said: “You will concur in a sentiment which has already awakened universal sympathy. You will never suffer us to leave to foreign nations the glory of endowing the world of science and of art with one of the most wonderful discoveries that honor our native land.” Daguerre never did much towards the improvement of his process. The high degree of sensibility which has been attained has been due to the experiments of others.

Daguerre is said to have been always averse to sitting for his own picture, and there are but few photographs of him in existence. The one from which our engraving is copied was taken by Mr. Meade of this city, and first appeared in the Daguerrean Journal, a monthly periodical conducted by S. D. Humphrey and L. L. Hill, who were distinguished for their improvements upon Daguerre’s process.

The American Journal of Photography by Various

The ABC of Photography – Alternative processes

The ABC of Photography – Astrophotography